This year the CECA announced they would be holding their Inaugural CECA Excellence Awards.  Clonmel Enterprises Ltd submitted two projects falling into two of the available categories.

The first category was open to projects under €2m in value and Clonmel Enterprises Ltd submitted the Restoration and Refurbishment of Beaver Row Footbridge and are proud to announce it was Highly Commended in this Category.

Background
The Beaver Row Footbridge connects Beaver Row to Brookvale Road in Donnybrook, Dublin. This bridge was constructed circa 1880 and is considered a landmark of Donnybrook with cultural, amenity, social and heritage value. The footbridge which was a local community access to Donnybrook church has been closed to the public for a number of years due to safety concerns.   The cast iron footbridge has significant architectural heritage value and is a protected structure, as such all rehabilitation were required to be carried out at a prequalified specialist ironwork repair facility.  The bridge consists of two 1.15m deep lattice trusses either side of a 0.95m wide footway. The footway was subsequently constructed in concrete, supported on a stiffened wrought iron deck supported on the trusses. The bridge is two spans with a cast iron central pier supported on a concrete foundation within the river supported at either end on masonry abutments.   An assessment of the bridge identified significant corrosion of truss and deck members.

Design Solution
It appeared that the concrete deck, which had been cast sometime in the 80’s had caused a significant amount of the deterioration by trapping moisture against the iron elements. The solution was an integration between old and new materials. The original deck which was initially timber and later concrete, was now replaced with a fabricated steel deck waterproofed and texture surfaced which acted as the main structural element. This was not visible in the final solution. All other existing cast iron elements were to be restored with cast iron.

Enabling Works
To carry out the restoration, the entire bridge was transported to a foundry. The location of the bridge presented some significant challenges with both safety and environmental risks.  To minimise the weight of the lift, the existing concrete deck was removed in-situ over the river with associated environmental risks of contamination to the River Dodder. In order to carry out the work to remove the deck and lift the bridge the river was accessed.  While the river flowed at a depth of approx. 400mm, the Dodder River is very prone to flash flood and any temporary works was designed with this in mind.  The replacement central pier was founded on rock in the centre of the river approx. 2m below bed level on an in-situ concrete base again with associated environmental risks.  The proximity to high river walls and services in footways resulted in a significant reach for craneage to lift the full span off the piers and abutments. Temporary supports were fixed to the deck to ensure integrity of the structure during the lift.

Restoration
Bushy Park Ironworks, Artist Blacksmiths and Metal Workers carried out the restoration works. To maintain the historical heritage of the structure it was necessary to replace the corroded sections of the structure with comparable cast iron elements. These were salvaged from original Dublin railings and Naval chains from the UK. The materials were worked using original Blacksmiths methods to produce the replacement sections for the trusses. This included in excess of 500 hand forged rivets to be used as structural connections.

The skills, knowledge and commitment of our site team and the many specialists who protected, removed, restored and reinstalled a 140 year old protected structure have given us an attractive functional new bridge to be proud of for many generations. 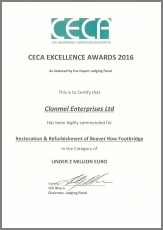 The second category was open to projects between €2 and €5m in value and Clonmel Enterprises Ltd submitted the Leopardstown Link Road and Roundabout Reconfiguration project and we are proud to announce that it too was Highly Commended in this Category.

Background
Leopardstown Roundabout is a critical junction in DLRCC area. It is immediately accessible to the M50, the N11, Sandyford Industrial Estate, Sandyford Luas terminus, South County Business Park and Leopardstown Racecourse. The contract required the conversion of the existing 5 leg roundabout in to a fully signalised, pedestrian and cyclist friendly roundabout.

Design Solution
The design solution included aspects which provided significant added value to the local community over and above a traffic solution.  These included a park area, which was created around an attenuation pond integrating the functional drainage system into its surroundings.  Key elements of this integration were an architectural footbridge, quality paving and park furniture.  The entrance to Leopardstown racecourse was relocated and significantly upgraded and sympathetically included in adjacent parkland and all boundary walls were constructed in local stone.  Existing services were upgraded to provide for future development and the main and adjacent junctions were made significantly more pedestrian and cyclist friendly.

Construction Challenges
The existing environment presented a massive challenge to construct the proposed design and maintain all existing facilities and services. As well as the obvious vehicular and pedestrian traffic, the area had significant underground services. These services included not just dangerous power and gas supplies but also critical economic communication connections to significant employers and service suppliers in the area. While there was one link road to be reconstructed off line in available lands, the majority of the works were to be constructed on-line.  Due to the difficulty in accessing site investigation locations, there was not a lot of up to date as-built data available for existing services prior to the construction phase. This resulted in a risk to planned phases and programming of the project.

Project Management
It was to be a very complex contract to project manage, ensuring the safety of all site operatives and public while delivering a quality project.  Project planning and phasing was the first stage of the project. We carry out significant works in similar environments and the majority of our engineering staff are trained and experienced in planning similar works. The complexity and phasing required for this project was as detailed as anything previously encountered.  While each phase was planned to deliver the contract to completion, flexibility had to be included to ensure that most eventualities could be dealt with. This required that at all stages while working on any particular phase, other investigation activities were being planned and executed to ensure that the next and subsequent phases could be commenced as planned.

Construction
Most critical to the safe and timely completion of the works were the construction teams on the ground. While project management produced plans and phases based on the information in front of them, the teams on the ground had the huge responsibility to implement the plans safely. The pro-active approach of the construction teams who dealt with the challenges uncovered each day to maintain progress and provide information to facilitate planning of subsequent phases, and at most times minimise disruption while at all times ensuring the safety of both the public and themselves, contributed hugely to the success of the project.

The contract was a triumph of project management communicating with construction teams interfacing with 3rd parties and the public to ensure the safe and quality delivery of a project which had significant economic benefits to the greater community while also delivering benefits to the local community. 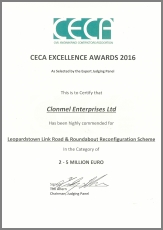